Only about 4% of the world’s oceans remain undamaged by human activity, according to the first detailed global map of human impacts on the seas.

A study in Science journal says climate change, fishing, pollution and other human factors have exacted a heavy toll on almost half of the marine waters.

Only remote icy areas near the poles are relatively pristine, but they face threats as ice sheets melt, it warns.

The authors say the data is a “wake-up call” to policymakers.

…the two biggest drivers in destroying marine habitats were climate change and over-fishing.

“Out on the high seas, climate change and fishing were far and away the strongest influences,” he explained. “The least impacted areas are the polar regions but they are not untouched.”

“The message for policymakers seems clear to me: conservation action that cuts across the whole set of human impacts is needed now in many places around the globe.”

You can read the whole article here. 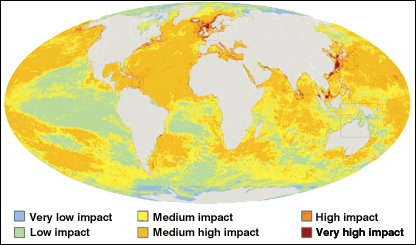