“I am the dreaded swing voter.

So you can imagine my surprise when my wife suggested we spend a Saturday morning canvassing for Obama. I have never canvassed for any candidate. But I did, of course, what most middle-aged married men do: what I was told.

At the Obama headquarters, we stood in a group to receive our instructions. I wasn’t the oldest, but close, and the youngest was maybe in high school. I watched a campaign organizer match up a young black man who looked to be college age with a white guy about my age to canvas together. It should not have been a big thing, but the beauty of the image did not escape me.

Instead of walking the tree-lined streets near our home, my wife and I were instructed to canvass a housing project. A middle-aged white couple with clipboards could not look more out of place in this predominantly black neighborhood.

We knocked on doors and voices from behind carefully locked doors shouted, “Who is it?”

“We’re from the Obama campaign,” we’d answer. And just like that doors opened and folks with wide smiles came out on the porch to talk.

Grandmothers kept one hand on their grandchildren and made sure they had all the information they needed for their son or daughter to vote for the first time.

Young people came to the door rubbing sleep from their eyes to find out where they could vote early, to make sure their vote got counted.

We knocked on every door we could find and checked off every name on our list. We did our job, but Obama may not have been the one who got the most out of the day’s work.

I learned in just those three hours that this election is not about what we think of as the “big things.”

It’s not about taxes. I’m pretty sure mine are going to go up no matter who is elected.

It’s not about foreign policy. I think we’ll figure out a way to get out of Iraq and Afghanistan no matter which party controls the White House, mostly because the people who live there don’t want us there anymore.

I don’t see either of the candidates as having all the answers.

I’ve learned that this election is about the heart of America. It’s about the young people who are losing hope and the old people who have been forgotten. It’s about those who have worked all their lives and never fully realized the promise of America, but see that promise for their grandchildren in Barack Obama. The poor see a chance, when they often have few. I saw hope in the eyes and faces in those doorways.

My wife and I went out last weekend to knock on more doors. But this time, not because it was her idea. I don’t know what it’s going to do for the Obama campaign, but it’s doing a lot for me.” 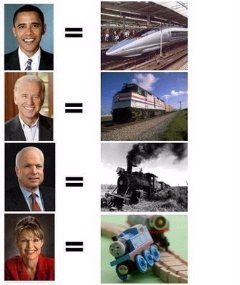