According to Merriam-Webster online dictionary the defintion of IMMUNITY is:

“the quality or state of being immune”, to take it one step further, let’s define IMMUNE:

“free” or “exempt”, which is defined as”

Here is the important part.  The part where we use it in a sentence (and a few paragraphs):

The Supreme Court ruled today that officials of city and county governments have absolute immunity from suits for damages for their legislative actions.

The unanimous decision brought the doctrine of immunity for local legislators in line with the immunity already enjoyed by state legislators, members of regional legislative bodies and members of Congress: none may be sued for actions taken in their lawmaking capacity.

Congressional immunity is found in the Constitution, in the Speech and Debate Clause of Article I. Supreme Court precedents dating back nearly 50 years established the other immunities. Somewhat surprisingly, the Court had never directly addressed the question of immunity for local legislators.

From Wikipedia, the free encyclopedia

The Speech or Debate Clause (found in Article I, Section 6, Clause 1) is a clause in the United States Constitution which states that members of both Houses of Congress

Its intended purpose is to prevent a President or other officials of the Executive branch from having members arrested on a pretext to prevent them from voting a certain way or otherwise taking actions with which he or she might disagree.

A similar doctrine protects members of state legislatures in the United States, most legislators in most English-speaking countries, and in many other jurisdictions as well. 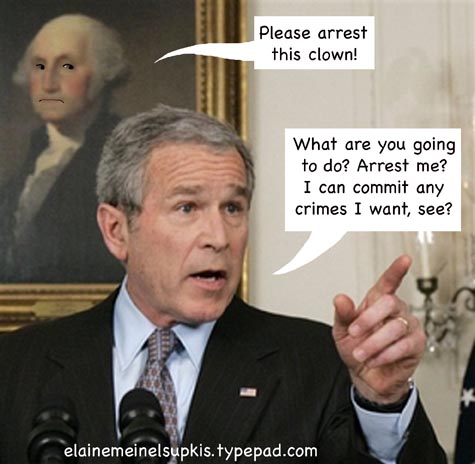 Yes.  That is precisely what we want to do.  Then we want to hang you by your testicles from the highest limb of the tree in the center of town.

5 thoughts on “word du jour: IMMUNITY (this is important, so read it!)”