Leeroy Le Gallais, 46, broke into the animal’s stable on two separate occasions to perform sex acts on the terrified animal.

During his first attack he used a bucket to stand behind the horse, called Calico, but was caught after leaving his underwear at the scene.

He was given a three-year probation order, but just months later returned to have sex with the same horse at the Castel Stable in Guernsey.

On the night of the second attack, on April 25 this year, Calico’s owner Michael Wortley checked on the animal in his stable at 6.30pm.

The 20-year-old bay gelding was covered with a blanket but when Mr Wortley returned in the morning the blanket was on the floor.

A mounting stool that was left outside the stable had been taken inside and police immediately suspected Le Gallais was responsible.

After the second attack Calico was seen ‘box walking’, or moving sideways, a common sign of stress. 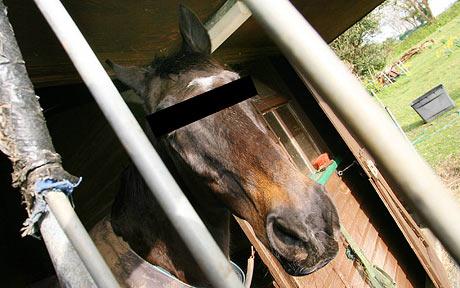 One thought on “Just when you think it doesn’t get any worse: “Man has been jailed for three years after being caught having sex with a horse””