Where do I begin?

No one shakes hands anymore in Zimbabwe because the of fear of contracting cholera:

“The country that was once the jewel in Africa’s crown, able to feed itself, heal its sick and educate its people to the highest standards on the continent, is now in a pitiful state.

Harare’s main hospitals are closed, doctors and nurses are striking over their meagre “Zim dollar” pay and the country’s water and sanitation services are tearing at the seams.

Manhole covers in the streets haemorrhage water because underground pipes have burst.

For many Zimbabweans, shallow wells with filthy water are the only means of quenching their thirst, despite the high risk of becoming ill. The cholera crisis which has already claimed nearly 1,000 lives, is the most potent symbol yet of Zimbabwe’s collapse.”

Zimbabwe is enshrouded in the “stench of death” and the situation worsens:

“A strong odour pounces up your nose, choking it stone dry, as you drive into Harare’s Mbare township past hostels and its popular market, Mbare Musika.

The stomach-churning stench is enough to kill your appetite for a week.

East of the township, more sewage flows effortlessly into the Mukuvisi River, one of the city’s main suppliers of water.

Communal toilets in the surrounding hostels hosting hundreds of families have broken down.  As pumps are not working, sewage waste from burst pipes flows from the hostels’ third floor down, leaving waste traces on the windows.  And on the walls below, a thick dark layer of waste, hanging loose on windows has been accumulating over the past months.”

Meanwhile, their “leader” Robert Mubage has completely lost touch with reality and blames the U.S. for these problems:

Zimbabwe’s President Robert Mugabe has rejected calls from the US and UK for him to stand down, branding them “stupid and foolish”.

Mr Mugabe was speaking after the US said a power-sharing deal in Zimbabwe was not possible with him in power.

He said criticism from President George Bush was irrelevant and the “last kicks of a dying horse”.

Mr Mugabe has been facing intensified criticism over the dire economic and humanitarian situation in Zimbabwe.

On Sunday, US Assistant Secretary of State for Foreign Affairs Jendayi Frazer said Zimbabwe’s leader had lost touch with reality.

Zimbabwean Human Rights Activists Attempt To Overthrow The Government (as they should) Appear In Court:

The state-run Herald newspaper says Ms Mukoko is charged with attempting to recruit people for military training to try to overthrow the government.

It is unclear when or where the director of the Zimbabwe Peace Project has been over the past three weeks.

The police denied opposition claims that they had been holding her.

After the brief court appearance on Wednesday, officials said the case was being referred up to the High Court and that Ms Mukoko and eight others would be remanded in custody.

A judge ruled that the nine should be taken to private clinics under police supervision, but police are said to have ignored the order. 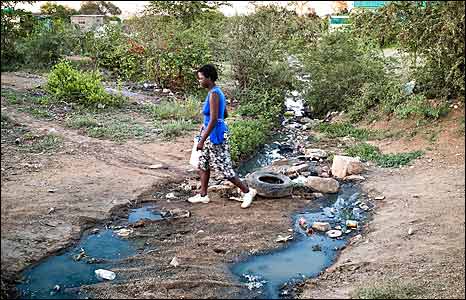 Years of neglect means that clean water is scarce in Zimbabwe. Raw sewage flows through the streets. There are fears that with the onset of the rainy season the cholera will continue to spread.

One thought on “ZIMBABWE UPDATE: Cholera, Lack of Food and Water, Mugabe, Attempts To Overthrow The Government… Not For The Faint Of Heart”