John Paul Foster II, 22, of Seaside in Monterey County, and Michael Alexander Clemmons, 19, of Tustin were arrested and arraigned this week in the July 2008 assault. The third suspect, Luster Ditto Lewis, 20, of Irvine, turned himself in Friday and was arraigned.

The three men, friends from Tustin High School, are each charged with multiple felonies. If convicted, they each face a maximum of 18 years in prison.

Clemmons is a running back for the Santa Ana College team, and Lewis is a wide receiver, according to the school’s website.

Authorities say the men were drinking at the Key Inn hotel in the 1600 block of El Camino Real in Tustin. The 18-year-old victim, who knew the defendants through her boyfriend, came to the hotel after Lewis called her, police said.

She later passed out. Foster allegedly videotaped Clemmons and Lewis undressing the woman, positioning her body on the floor and assaulting her multiple times. Prosecutors accuse Foster of handing off the camera to sexually assault the woman and urinate on her.

Police are still investigating whether the woman was drinking and what caused her to pass out.

An associate of one suspect discovered the 19-minute recording Dec. 28 and gave it to police, Tustin police Lt. John Strain said.

All three suspects are being held in the Orange County Jail on $100,000 bail.

See video with photos of dirt bages here:  http://www.latimes.com/video/?autoStart=true&topVideoCatNo=default&clipId=3302048
On January 1 the San Francisco Chronicle reports: Two men and two teens have been arrested on suspicion of gang-raping a woman last month in the San Francisco Bay area while allegedly taunting her for being a lesbian, police said Thursday.

Police on Wednesday also arrested a 15-year-old Richmond boy and a 16-year-old Hercules boy, who were being held at a juvenile detention center on similar charges. Their names were not released.

Josue Gonzalez, 21, turned himself in Thursday after police announced they were searching for him. He was wanted on charges of gang rape, kidnapping and carjacking.

Gagan said Gonzalez asked for an attorney when he turned himself in but said nothing about his alleged role in the attack.

Detectives say the 28-year-old victim was attacked on Dec. 13 after she got out of her car, which bore a rainbow gay pride sticker. The alleged attackers made comments indicating they knew she was a lesbian, police said.

Authorities have characterized the case as a hate crime. Police said the victim lives openly with a female partner.

The 45-minute attack started when one of the men approached the woman in the street, struck her with a blunt object, ordered her to disrobe and sexually assaulted her with the help of the others, according to detectives.

When the group saw another person approaching, they forced the victim back into her car and took her to a burned-out apartment building. She was raped again inside and outside the vehicle and left naked outside the building while the alleged assailants took her wallet and drove off in her car, police said. 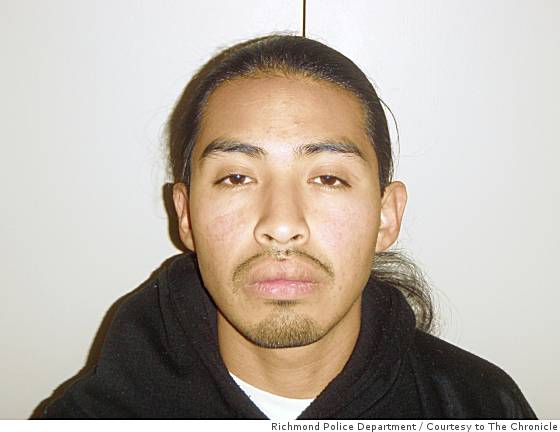 Richmond police have arrested 21-year-old Josue Gonzalez as a suspect in the alleged gang rape in December of a 28-year-old lesbian woman. (Richmond Police Department / Courtesy to The Chronicle)