Following up on my most significant memes of 2013, this post is about some of my favorite and most shared memes of 2014.  As I looked through my posts I was surprised that many of these have been shared thousands and thousands of times that I didn’t know about.

As time goes on, I think my memes get more aesthetically pleasing…  most of the time.  Sometimes, not so much.  But usually I’m pretty happy with them.  Seems like the angrier the subject matter makes me, the better everyone likes them.

If you would like to share them, please do so from the links provided.  There are usually stories from other associated with them.  If all these aren’t enough, you can see more here.

Let’s start off with this one from January 14, 2014 inspired by LOLGOP:

This one, also inspired by LOLGOP was originally posted on February 3, 2014: 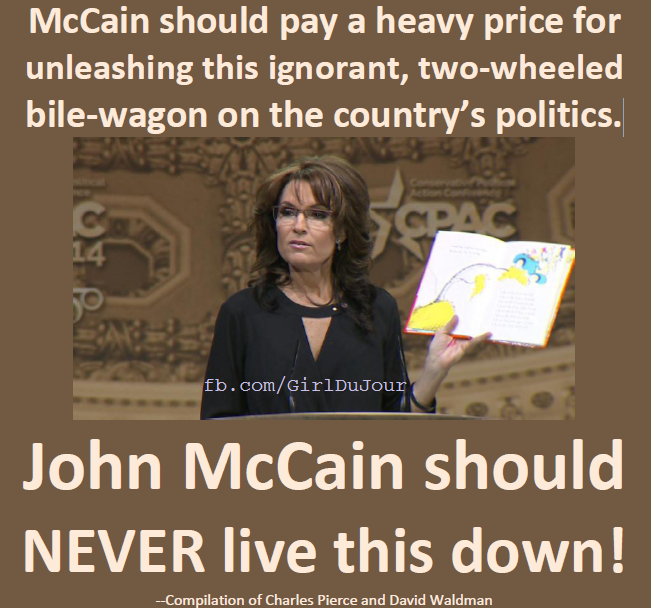 Republican, Doug Cox, from Oklahoma of all places floored me on April 3, 2014:

And you can always count on Steve Marmel to say something that knocks it out of the park, much like this on May 12, 2014: 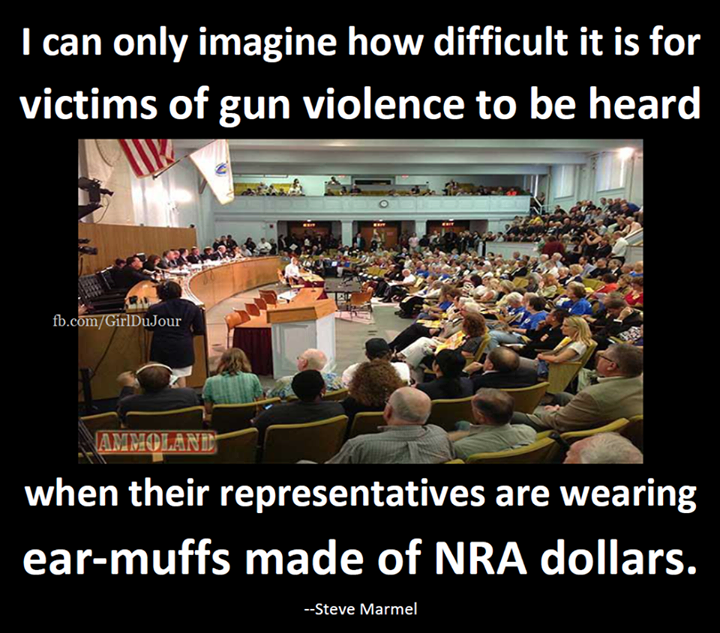 This is one of my favorites, from May 27, 2014–but originally made and posted as Veruca earlier: 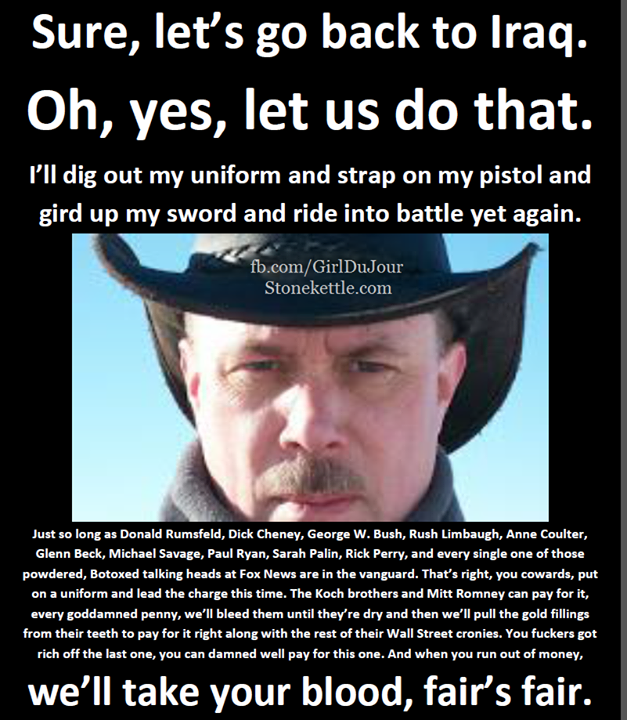 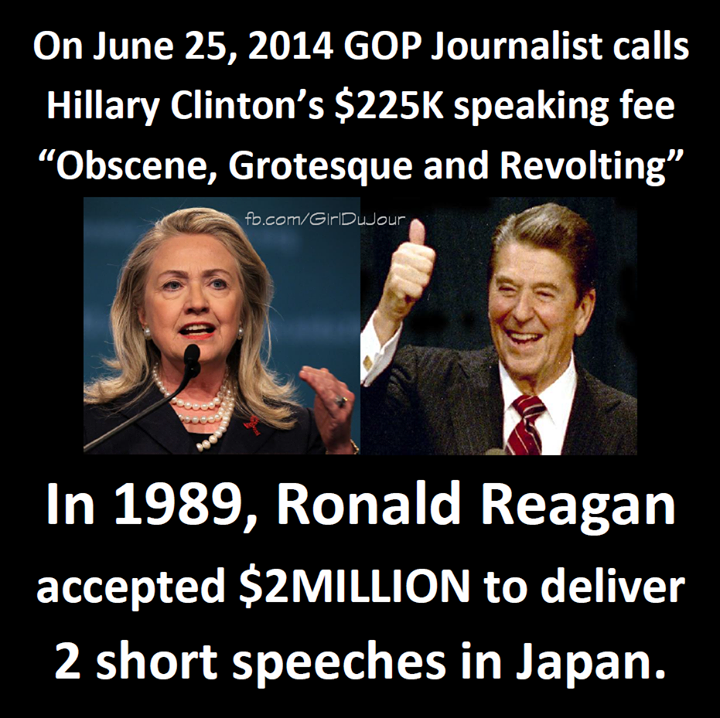 On July 6, 2014 William Rivers Pitt had something else to say:

Another way to remember July 6, 2014 is when some Americans decide that we should turn away refugee children and send them back to their native land to face certain rape, torture and murder.  This meme with the words of LOLGOP. 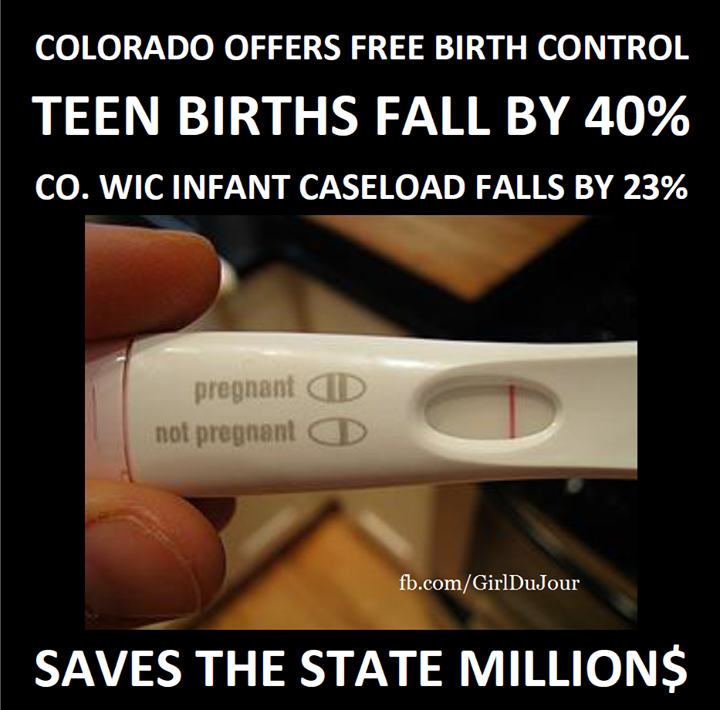 July was a good month for memes…  on the 11th I resurrected this one.  First version of this Steve Marmel quote was one of the first memes I ever made. 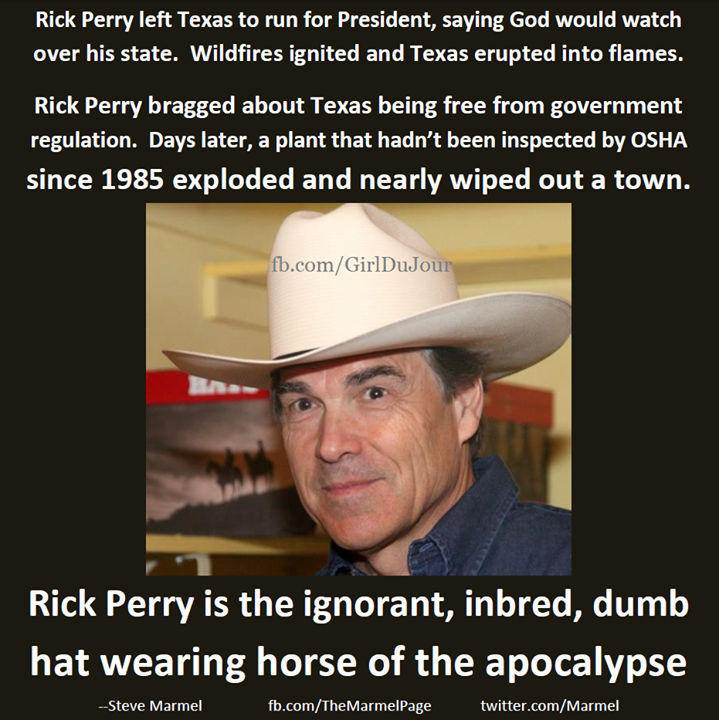 On July 13, 2014, I quoted Jim Wright at Stonekettle.com regarding some American’s inability to be, well, human.

When I first made this (as Veruca) in June 2013 Politifact (or one of those fact checkers) from Texas wanted to interview me.  I’m proud of all my Rick Perry memes.  He’s an idiot, and if he ever ends up as President it wasn’t because I didn’t try to tell you all what an idiot he is.  This was most recently reposted on July 14, 2014:

On July 23, 2014 we tossed around the novel idea of DOWNWARD INCOME REDISTRIBUTION, and not in a trickle sort of way:

Another GEM with Jim Wright at Stonekettle.com on July 24, 2014: 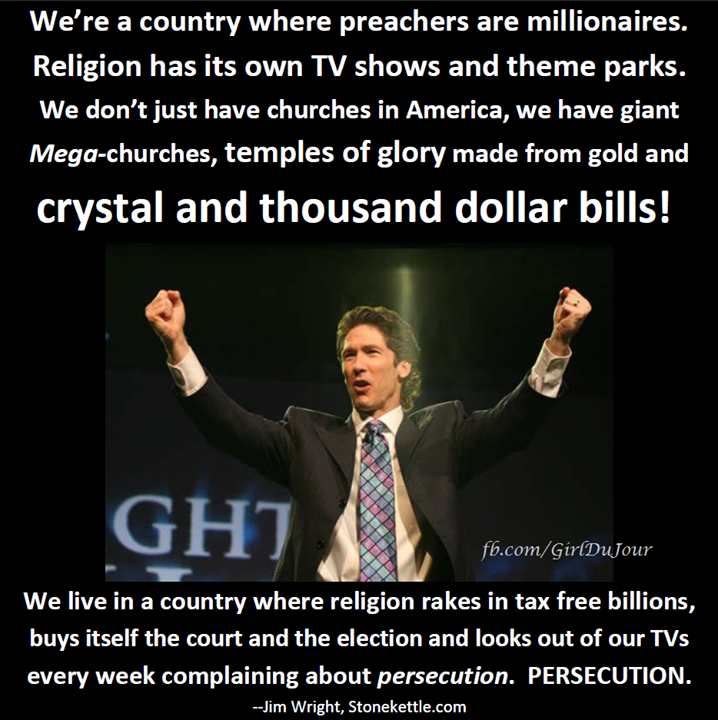 On July 30, 2014 Ted Cruz wanted to “repeal every bloody word” of Obamacare while Boner, simultaneously, wanted to sue the President for not implementing it fast enough.  I kid you not.

John Boehner truly is the Sphincter Of The House:

On August 15, 2014 Steve Marmel and I helped point out that several current members of the GOP could–and should–be facing prison time soon: 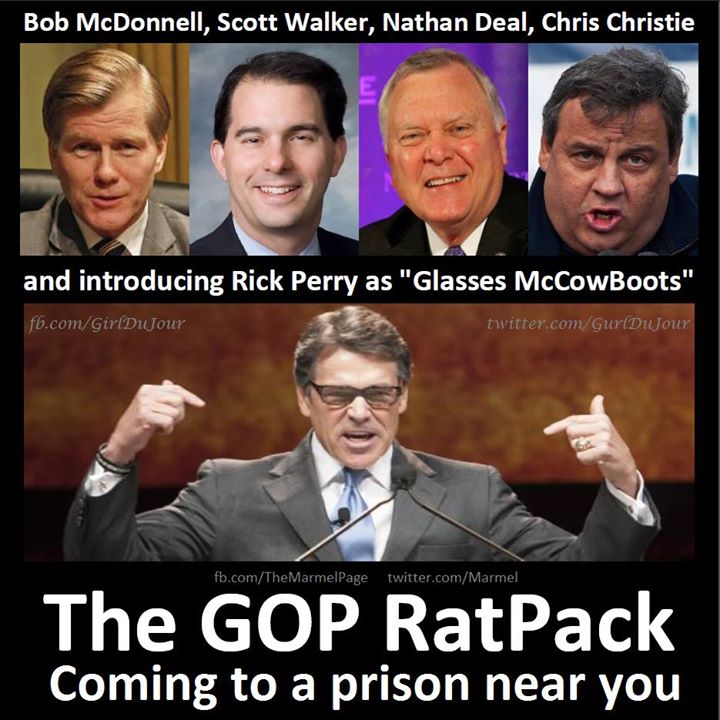 On August 16, 2014, ClydeTheSlyde discusses the hypocrisy of “abuse of power” lawsuits:

On August 26, 2014 I pointed out the difference #WhyWhitePeopleRiot:

On September 19, 2014 the iPhone 6 was released.  James Finch at Quantum Mechanic points Sheeple waited in lines overnight, some for days, but did they show up at the voting booths on November 6?  As of December 30, 2014 this meme has 11,928 shares…  could be the record for me for the year.

On September 27, 2014 after my page was overrun with racists over Latte Gate, but were okay with Mike Brown being murdered, it pissed me off.  Several thousand people agreed and shared this far and wide: 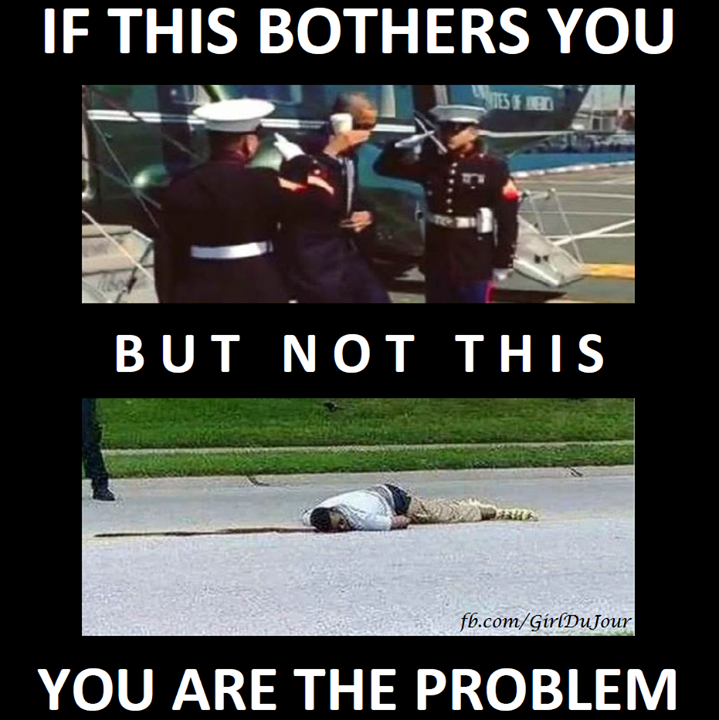 On October 12, 2014 Family Values Republican, David Vitter, who paid prostitutes to have sex with him, dress him in a diaper and wipe his ass, was holding up the Ebola Aid package while whining that the President wasn’t doing anything about Ebola.  Seriously.

I made the very first version of this meme of Lee Camp‘s legendary rant back when I was Veruca.  But since my meme-making skills have improved I spiffed it up and reposted it on October 14, 2014 and it still got well over 5,000 shares.

On November 4, 2014 when Democrats SAT ON THEIR ASSES INSTEAD VOTING Stephen Colbert asks if we’d like a drink or something stronger?  perhaps a revolver?

On November 5, 2014, Jim Wright took it one step further…  he took non-voting Democrats and those in that turned their back on President Obama out behind the woodshed.

On November 7, 2014 a 90 year old veteran and 2 pastors were arrested in Florida for feeding the homeless — while Billionaires bought the election. 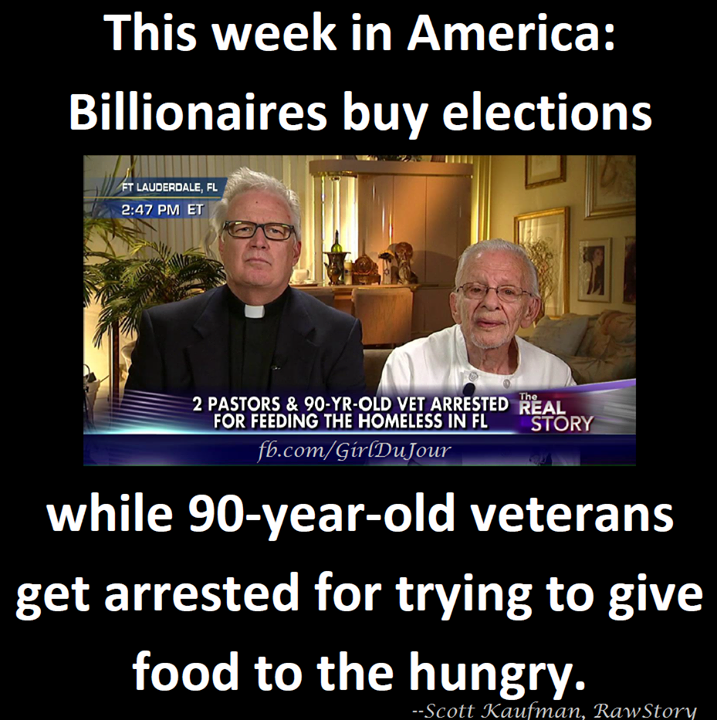 On November 12, 2014 a robot was landed on a comet.  Truly amazing.  BUT we haven’t figured out a way to end world hunger or overpopulation?  #Priorities 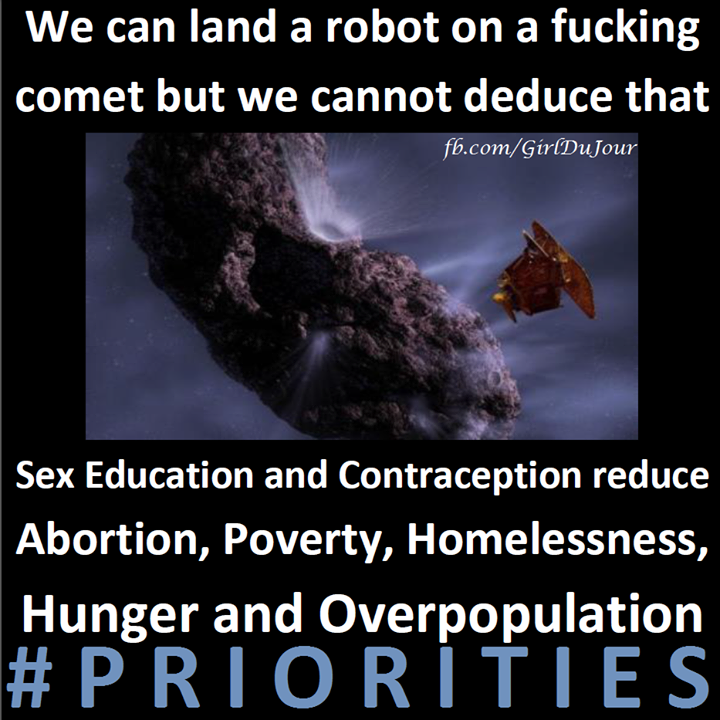 On November 18, 2014 my good friend Steve Marmel pointed out that Charles Manson was getting married but that in many states, gay people still cannot. 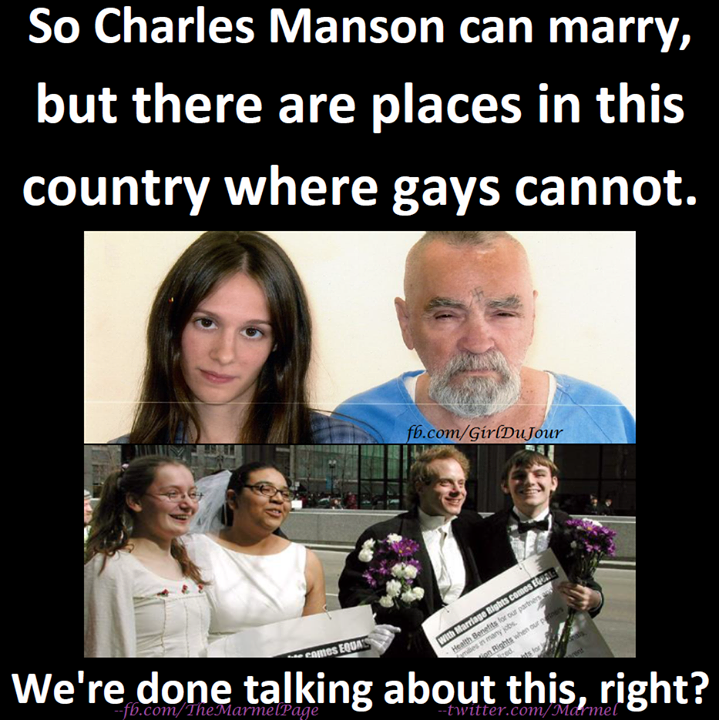 On November 21, 2014, Lizz Winstead asks if the GOP can sue President Obama for DOING his job, can WE sue them for NOT doing theirs?

Speaking of NOT doing their job…  On November 26, 2014 Robert McCulloch, supposedly a prosecutor, but helped raise over $400K for the defense of Darren Wilson–and helped him get away with murder. 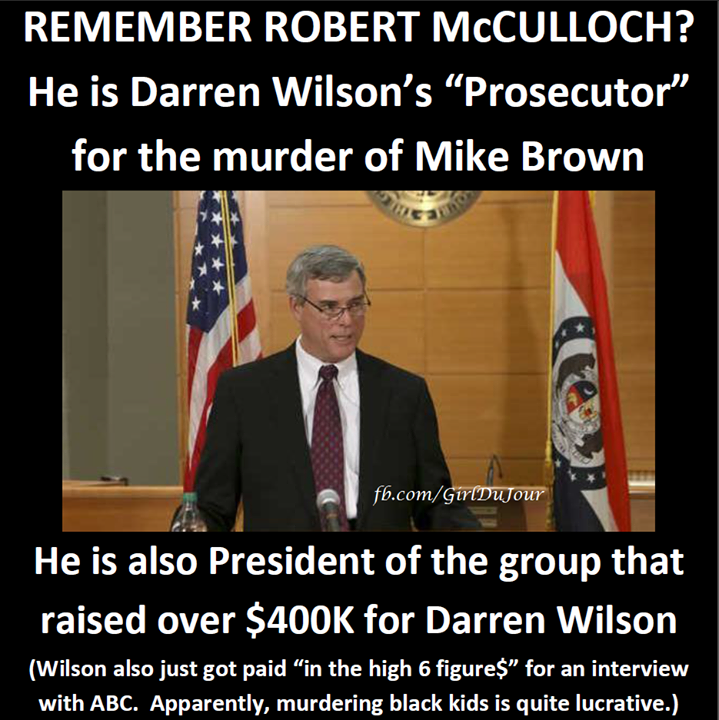 On December 1, 2014 after months of protests and riots because cops like Darren Wilson are getting away with murdering unarmed black men like Mike Brown, Stephen Colbert points out that these people are just not okay with that.

On December 4, 2014 in conjunction with the Bipartisan Report we point out that if you get upset over abortion but not the murders of Eric Garner, Mike Brown, Tamir Rice and John Crawford III, you are NOT pro-life.

On December 4, 2014, Father James Martin, SJ explains that if a man says #ICantBreathe you should let him breathe.

On December 6, 2014 we discover that Darren Wilson didn’t resign because he killed a teenager.  Killing a teenager made him wealthy enough to retire.  (Over $400K from the “prosecutor” and about $600K from his ABC interview.)  Wanna bet there’s a book deal in the making???

On December 8, 2014 I saw this picture of LadySpeech and couldn’t help but make a meme with #SmudgeThePolice

On December 12, 2014, Jagoff and Chickenhawk, Tom Coburn wants to deny benefits to active duty military and veterans and Jim Wright tells him to go fuck himself in the most poetic way possible. 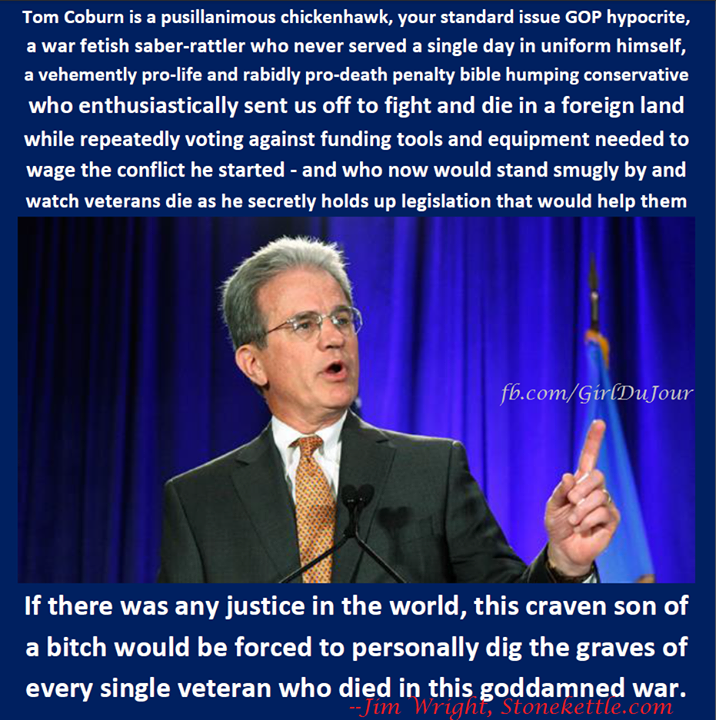 December 13, 2014, we learn that Jamie Dimon and Barack Obama lobby Congress to pass the Omnibus Bill with language literally written by Dimon’s Citigroup which would allow big banks to  make risky trades and get bailed out–which is what got us in this mess in the first place.  #MoveYourMoney.  Small banks and credit unions won’t fuck us over like the big banks do.

On December 21, 2014, after the assassination of two NYPD officers by an out of state nutter from Maryland,  Loudmouth Lynch from police union claims it’s the protesters and Mayor DeBlasio’s fault.  Which, of course, it isn’t.  Sally Kohn explains:

December 27, 2014, after North Korea threatens Sony about releasing silly comedy “The Interview”, Sony do so online, bypassing theaters threatened by Kim Jong Un.  LOLGOP points out that the only way to stop Americans from seeing movies is to put Kirk Cameron in them. 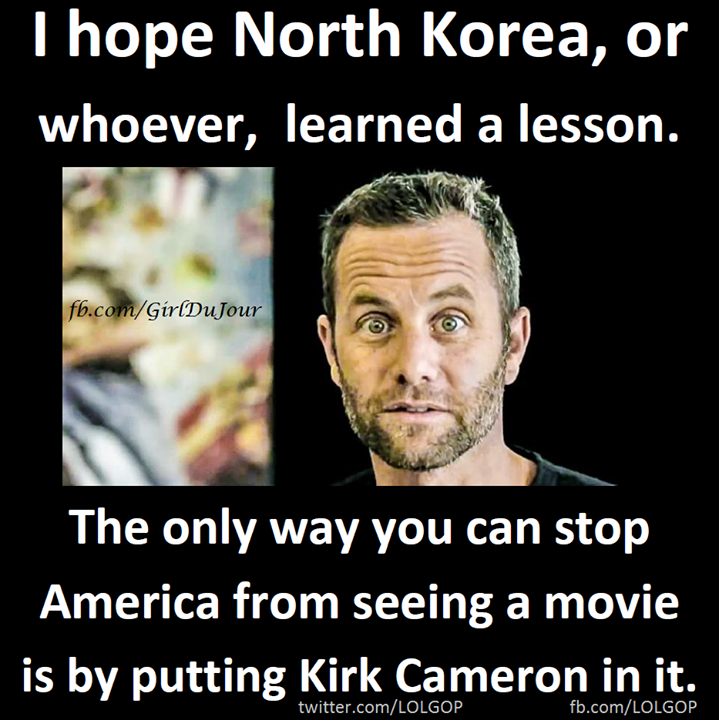 On December 28, 2014 I read an article in Time Magazine written by Kareem Abdul-Jabbar (who is infinitely more intelligent than Charles Barkley) and this quote struck me: 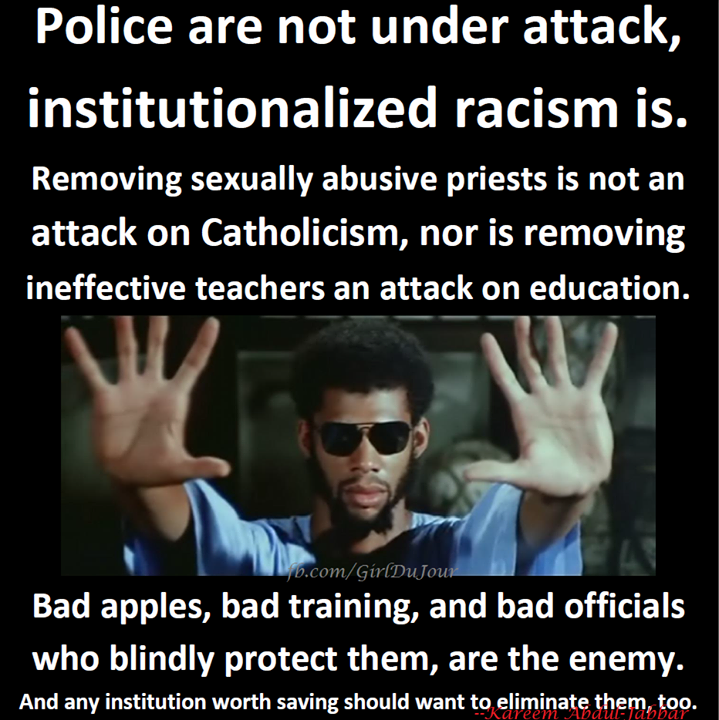